Why training on manned models? 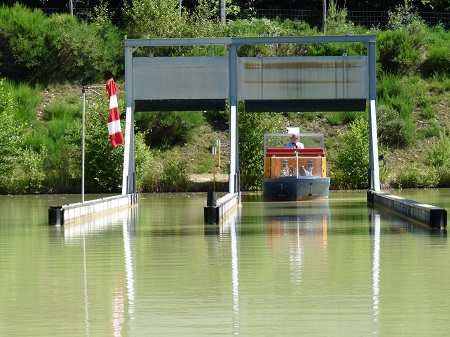 Because this is still the best way to acquire some reflexes which, when the time comes, will make all the difference between being good and being the best.
Training on the scale models provides experience that could never be gained on real ships for the simple reason that neither ship-owners nor local authorities would allow such risks to be taken.

Scale models allow the ship handler to make mistakes. Scale models allow experimentation on ship behaviour to explore unknown fields beyond the limits of safety. Periodic training on scale models will maintain your ship handling skills at the highest level and periodic evaluations will show it.

Training on the manned 1:25 scale models is a valuable complement to training on electronic simulators as it provides additional experience through a feeling of "déjà vu":

Sharpen your natural senses of perception and anticipation

53 years of experience have shown that students quickly get the feel of their models in the same way as the real ships they are accustomed to handling.

Reality will be much slower than the model, thus leaving quite a lot more time to react. Manned models sharpen the ship handlers' natural senses of perception and anticipation and enable an appreciation of the ships' behaviour as a whole.
The time scale also means that it is possible to perform five times as many manoeuvres. In other words, it is possible to perform as many manoeuvres in 35 hours on the models as in 175 hours on the real ship. If you then consider the cost of training on scale models compared to computer models as a cost per manoeuvre and per pilot, scale models might turn out to be even cheaper than computer models!!
Manned models are considered by ships' captains and pilots - ship handlers par excellence - as the next best thing to a full-scale prototype for studying and understanding a ship's behaviour.
A manned model training centre is also a permanent forum of ideas, an ideal meeting place where information and experience can be exchanged.
It is recommended that captains, masters and pilots train on manned models once every five years.

"I think the course will be immediately applicable and fully valid, everything was absolutely impressive and the program was run in a way that leaves no room for participants to focus on learning." Octobre 2017

"Port Revel is the world leader in manned model training, facilities, instructors, technicians and models are second to none." Septembre 2017

Read all the testimonies >